Today, I found a interesting difference between padding and margin when I’m working on Metrics 2.0 Introduction page. There are several VideoThumbnail widget on the page, which contains a video snapshot and a paragraph text description.
Here is the Html DOM of the widget, written in Haml:

The style looks fine, and here is how it looks:

But very soon, I found the widget with scrollbar is taller than the one without it, it is because padding on 2 elements next to each other will not be merged: Red rect in following snapshot 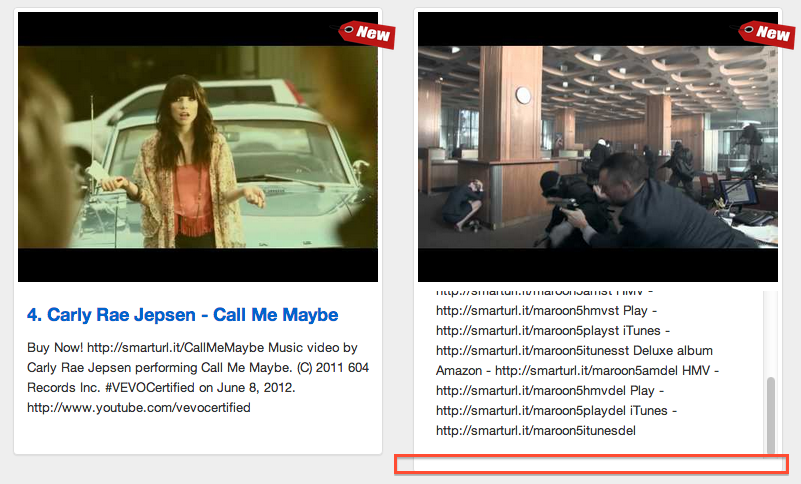 It is caused because padding will not merged together as margin does, To solve the issue, I changed the padding to margin in the stylesheet:

But bottom margin is corrected, but I found the scrollbar begin to occupy the space of content, which is not good! The center widget uses padding(Blue) and the right one uses margin(Red)

I use padding on the right but uses margin on other side, so vertical scrollbar will take the right padding when necessary. It is a very interesting CSS trick, and it works fine under webkit based browser.

Nokogiri is a really popular Xml and Html library for Ruby. People loves Nokogiri is not just because it is powerful and fast, the most important is its flexible and convenient.
Nokogiri works perfect in most aspects, but there is a big pitfall when handling the xml namespace!

I met a super weird issue when processing xml returned by Google Data API, and the API returns the following xml document:

I instantiated a Nokogiri::XML DOM with the xml document, and then I try to query the DOM with XPath: xml_dom.xpath '//entry':

I’m expecting entries is an array with 4 elements, but actually it is empty array. After a few tries, I found the query yields empty array when I introduce the element name in the query.

It is super weird.

And for some reason, the XPath query is namespace sensitive! It requires the full name rather than the local name, which means we should query the DOM with the code: xml_dom.xpath '//atom:entry', 'atom' => 'http://www.w3.org/2005/Atom'.

So in a sentence: XPath in Nokogiri doesn’t inherit the default namespace, so when query the DOM with default namespace, we need to explicitly specify the namespace in XPath query. It is really a hidden requirement and is very likely to be ignored by the developers!