One of the most annoying thing of Mac is that encoding, espeically you’re living in a non-Mac world.

So usually the movie subtitle files, the song lyrics files, the plain text novel files, the code contains Chinese, which you downloaded form web sites or recieved from others usually cannot be read because of the wrong encoding.

So I really wish to have an item in my finder’s context menu that I can adjust the encoding of selected files with 1-click.

Luckily, with the help of Ruby, Automator workflow and Mac OSX service, it isn’t that hard.

So basically, OSX loads all the workflow files saved in ~/Library/Services/, which is displayed as Context Menu in finder.

To build the service, work through the following steps:

2. Set service input as “files and folders from any application”.

Add a “Run Shell Script” action to execute the following ruby code, which is used to transcode the files passed to service. (For more detail about how to embed Ruby in workflow, check out Using RVMed Ruby in Mac Automator Workflow )

Make sure the input is passed as arugments to the ruby script.

4. Display a growl message when processing is done

5. Prompt user whether to keep the backup files

I use a Ask for confirmation action to ask whether user want to keep the backup files.
The workflow will abort if user clicks “No”, make sure you updated the text on the buttons, and texts are put on right button.

Add another “Run Shell Script” aciton to execute another piece of ruby code.

7. Display notification to tell user that backup files has been deleted 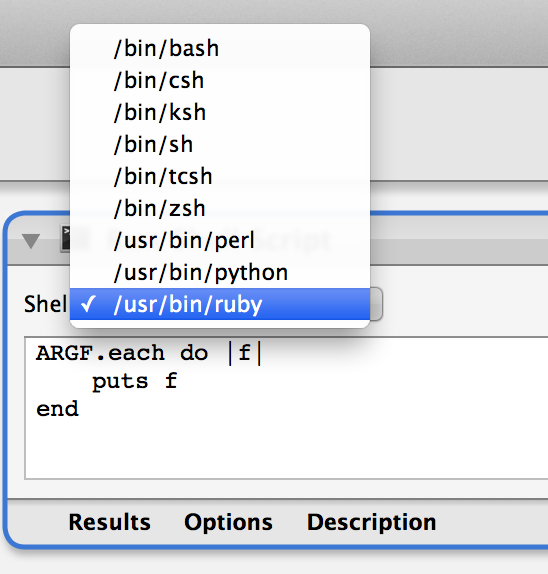 The Arduino IDE 1.5.3 introduced some new features, such as support latest board Yun, or introduces new libraries and samples. But I found it is too buggy to use.

1. Compile code against Arduino Nano fails due to parameter mcu passed to avrdude is missing.

Reason:
The issue seems caused because the new IDE merged the menu items for Nano board. But for some reason, the configuration haven’t been updated accordingly.

Workaround:
Choose Arduino Duemilanove and Diecimila instead of Arduino Nano. Nano uses same chip as Duemilanove(ATmega328) and Diecimila(ATmega168), but uses a different PCB design. So the binary should be compatible.

Reason:
The issue is caused because the API signature updated to String(*, unsigned char), but constants are still declared as int.